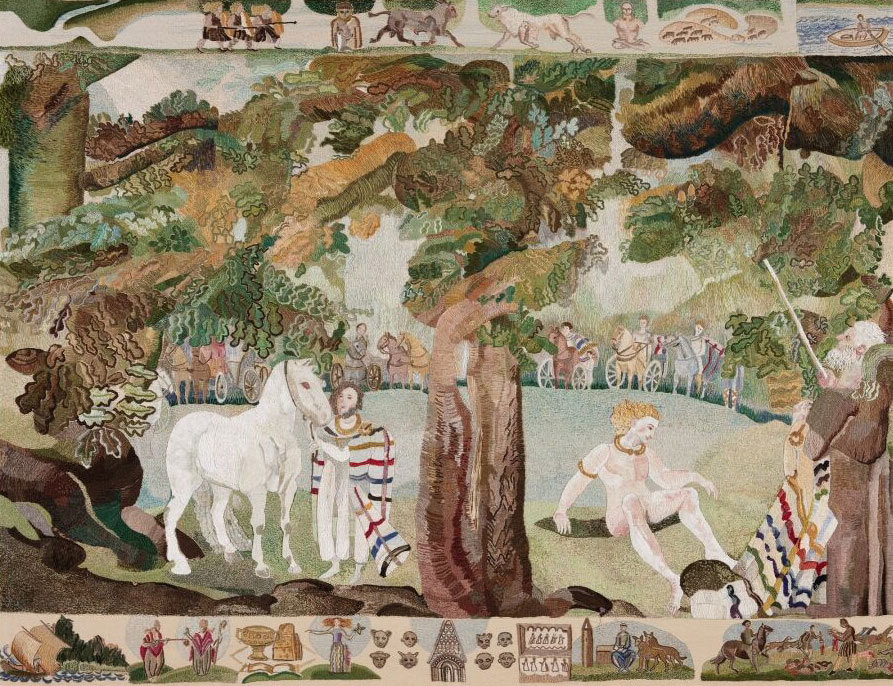 In the centuries prior to the Norman invasion, Ireland was governed by the intricate and relatively socially-advanced Brehon Law. These laws detailed the rights and responsibilities for people of all strata of society, with suggested punishments and compensations. It covered social issues such as marriage and divorce, along with land-ownership, procedure, social class and hierarchy. Ireland was divided into over a hundred basic territorial units each ruled over by a petty-king. Some of these kings were overlords of a number of túaths and became regional rulers. They would occasionally become powerful enough to subdue other regional rules and be declared High King.

This panel depicts the coronation of a young king, presided over by Brehon priests in typical Brehon circumstances i.e. in a sacred oak grove presided over by Brehon priests very similar in their ways of being to the Bramhin priest that was so common in India. There seems to be a strong Asian influence in the lives of the Celts in Ireland at that time. The coronation involved the symbolic union between a king and a white mare. The mare represented the earth goddess. This union between the immortal and divine was to ensure that the natural spirit would look kindly upon the new king’s reign. Due to this direct link to the divine, the king was personally responsible for the fortune of his community, so that in times of plague and famine the king would be held to account and risked being dispatched if circumstances remained dire.

On the top border can be seen remnants of the Celtic world and its influence from the East. Woman warriors, a Celtic god in the Lotus position, the brown bull and the white bull of Queen Maebh and her husband confront each other, cattle graze on summer pastures, and there is a remnant of Brehon law where a prisoner who has committed a serious offence has been put out to sea in a small boat with one oar and one meal and left to the fates.

The lower border shows scenes from early Christian Ireland –  St. Brendan sailing to America, two bishops amusing one another, a decorated gold chalice and book shrine, St. Bridget with her cross,  and  the door of Clonfert Cathedral showing evidence of the Celtic preoccupation with sacred heads.