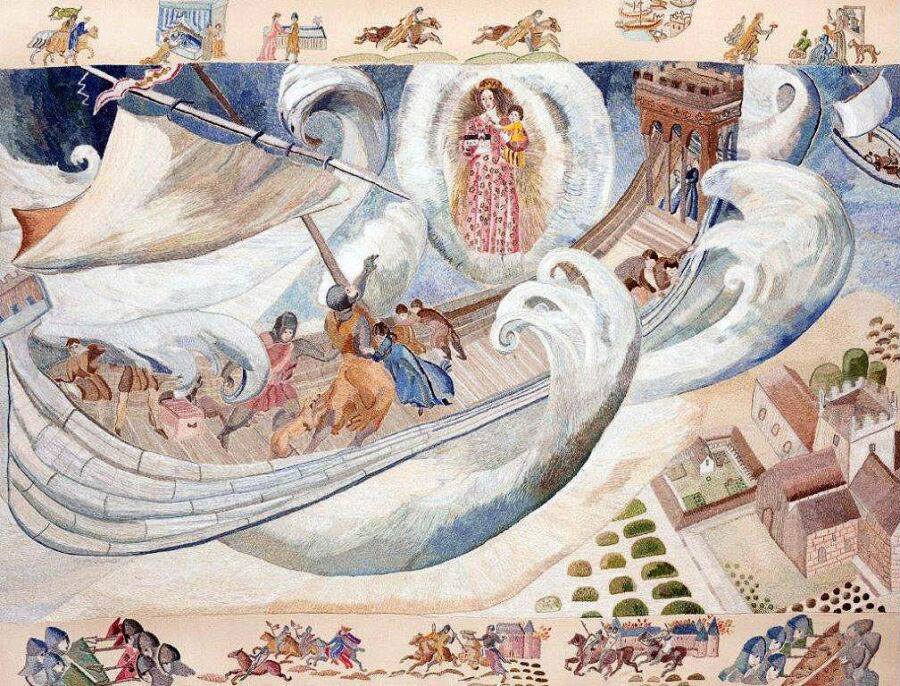 Isabel de Clare had inherited the Irish province of Leinster through her grandfather Dermot MacMurrough. “The Damsel of Striguil” as she was known, was held as a ward of the Crown in the Tower of London from the age of four, where her person and her considerable estates were jealously guarded.  In 1189 Henry II gave her in marriage to his heroic and highly talented knight and champion, William Marshal, who, despite his indispensable presence at the side of the Plantagenet Kings for many years, had little material possessions, thus making William the new Lord of Leinster.  He had to wait eleven  years before being granted royal permission to visit Ireland and his family estates. In 1200 William finally achieved permission from the distrustful King John, to set sail for Ireland with his wife and children, two of his sons being held hostage in England by John.  The crossing of the Irish Sea was far from plain sailing, with a violent storm threatening to overwhelm the Marshal’s ship, as well as the accompanying vessels which carried their horses, supplies and servants.  This panel depicts the treacherous conditions experienced by William Marshal and his family as they crossed the Irish Sea. William is shown comforting a daughter and vowing to the Virgin Mary that if they were spared he would build a Cistercian Abbey at their point of landfall. In the bottom right, we see the resulting Tintern Abbey Minor which was built at Saltmills in South Wexford.

The upper border shows William receiving from the dying King Henry II his gift of the de Clare bride, then galloping in all haste through Anjou, Maine and Normandy to reach London and presenting himself to his eighteen year old spouse-to-be before the next king, Richard the Lionheart, could reverse this offer .

The bottom border shows the life of William protecting the ageing King and running counter to Richard, his son, on the battlefield in France.  William spent very little time in England and you see the great battles of the time between Angevin kings and the Kings of France.  “The yellow broom against the lily“.   King Henry II’s three sons had turned against him because Henry had  hotheaded sons and he was slow to give them any authority.  They rebelled and joined the King of France against their father and here Richard I is shown chasing his father and his entourage out of the burning town of Le Mans.