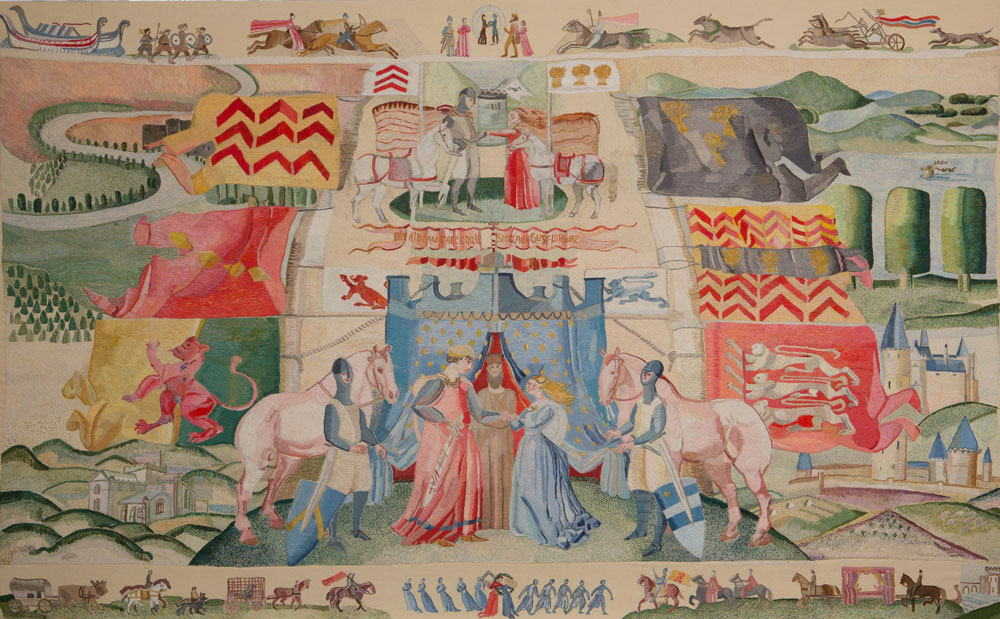 The course of Irish history was changed by two weddings.  At the top of the main panel Aoife is seen accepting Richard de Clare, also known as Strongbow, as her husband, thus legitimising his claim to the province of Leinster. Below is seen the wedding of their daughter Isabel and the knight William Marshal at Stoke d’Abernon in Surrey, flanked by William’s two friends Gilbert Pipart and Engerrand de Abernon. As reward for helping Dermot MacMurrough take back his kingdom, Richard de Clare arrived in Ireland in 1170 to marry the Irish king’s daughter Aoife.  Within the year, he had also claimed the kingship of Leinster following the death of MacMurrough in May 1171. A year later and Aoife gave birth to the couple’s daughter Isabel, who at the age of four and following the death of her father, became a ward of the Crown and lived at court in London.  As the sole heir to her father’s land and title, her marriage to William Marshal in 1189 made her husband one of the richest men in the kingdom.  William was granted Isabel’s hand in marriage by King Henry II as a reward for his consistent bravery and enduring loyalty. Despite their age difference – Isabel was just 18 and William over 40, the marriage was a long and happy one.  Their five daughters inherited their combined estates, the five sons dying without issue. The fate of Leinster might very well have been different if one of the male children had established a family line.

Depicted on the panel are the properties which they each brought to the marriage.  Beside William is his small property of Cartmell in Lancashire, England, whilst alongside Isabel are her huge estates, the Welsh properties of Chepstow Castle and the fortress of Goodrich from her father, and as Strongbow’s sole heir, the vast holdings of Pembroke and Leinster, along with the Chateaux of Orbec and Dieppe from her Gifford relatives.

The upper border show the antecedents of the couple, William’s Viking blood and Isabel’s Celtic background.   On one side are the Celts in their chariot and  also  Bishop Laurence O’ Toole who was the uncle of Aoife, a very important cleric at the time.  On the other side you see Viking orientated Normans and the parents of Strongbow.

The bottom border shows the marriage.  Isabel is carried in a litter from the White Tower of London which had been her home, for her honeymoon in Stoke d’Abernon which was a property belonging to a friend of Marshal’s where they spent their first nights.  His gifts to his bride and the wedding itself were paid for by the friend, Sir Engerrand, and the honeymoon was spent on that kind man’s property. Stoke d’Abernon is now known, as a result, as the first historical honeymoon destination in England.  In the middle you see the issue of Isabel and William Marshal; five sons and five daughters. What was spectacular and bizarre about it is that the sons, though married, some of them twice, had no children, neither girls nor boys.  It meant that Leinster was inherited by the girls and their husbands.  Lands were divided up in Leinster to make suitable dowries for the girls, which meant breaking up the estate for ever.