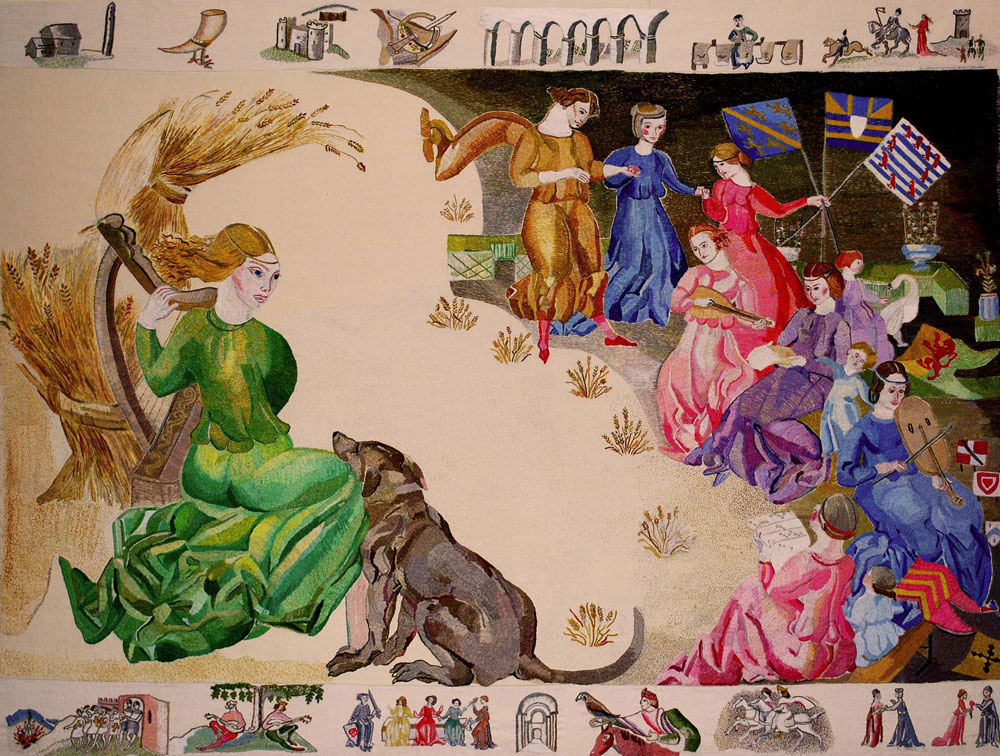 In this panel, the five great granddaughters of Dermot McMurrough, Mathilda, Aoife, Sibyl, Joan and Maud, sit with their parents in a garden, singing and playing music, which their father William Marshal may have  taught them. He had a fine voice and the songs would have been troubadour love songs, first heard by him in the court of Eleanor of Aquitaine. Given the different traits and accomplishments inherited by the girls, theirs would be a civilising influence on their tough Norman husbands.

On the other side of the panel Aoife sits alone, in the shelter of the MacMurrough emblem –  the sheaf of corn. Hers must have been a strange life, but to this day, her blood flows in nearly every influential family of Norman descent in England.   She was the daughter of Mor O’Toole and Dermot McMurrough, King of Leinster, and was at fourteen years old a beautiful girl. Though she had an older sister, it was she who was taken with her parents to meet Henry II in Aquitaine in 1167.  Dermot  was looking for help from Henry l l, then King of England, Duke of Normandy, Anjou and Aquitaine, whose realm stretched from the Pyrenees to the borders of Scotland.   The Angevin King gave permission to his vassal, Richard FitzGilbert de Clare to assist Dermot in his struggle in Leinster.  Part of the deal was that the widower Richard, later known as Strongbow,  should  have Aoife in marriage, and the kingship of Leinster on Dermot’s death.

Though there was much that was dubious about this arrangement, it did came to pass.   Aoife was married to the fifty-year old Strongbow in Waterford in 1170, thus starting a dynasty which ran mainly on the distaff side for several generations.  Aoife bore two children before the death of her husband.  Gilbert died as a baby, so their daughter Isabel became the heiress of her parent’s large estates.  She was made a ward of the Crown at four and a half years old when they died, and lived, heavily protected, in the Tower of London, where she grew up at court. She was very rich – all the de Clare property, now restored, came to her, as did the province of Leinster through her grandfather.  Through the ancient Gifford family she also inherited extensive holdings in the north of France.

The illustrious William Marshal won her as his wife when she was eighteen. Through her, he became Earl of Pembroke and Lord of Leinster. What her feelings were about being married off to a middle aged warrior, however famous, are not known. However, they seem to have become a  loving couple and she bore him ten children, five sons and five daughters.   William’s life in the service of the Angevin Kings, Henry II, Richard the Lionheart, John Lackland and Henry III continued until his death in 1219. . With the death of King John in 1216, William became Regent of England, as John’s son was only nine years old.  He remained Regent until his death in 1219.   He must have felt that his line through his five sons was well assured, but astonishingly, despite several marriages, all of them died without bearing any children.  The ownership of Leinster fell to his five daughters and through them their husbands inherited both titles and land.

The top border shows the Irish cultural artefacts of the time, the early Irish churches, the MacMurrough charter horn, now in the National Museum of Ireland, the castle at Ferns belonging to Dermot, and the Tara brooch,  one of the most famous artefacts, well known in the Celtic world. Also shown are the pillars at Baltinglass where Dermot had established an order of Cistercian monks. The five daughters of William are shown, having their complicated dowries drawn up by a legal scribe, resulting in the breaking up of estates in Carlow, and parts of Kilkenny and Wexford

On the bottom border you see the European preoccupations of the the time, in other words what the girls would have been talking about when they sat together singing or playing their instruments. There is a vignette of the annihilation of the Cathars  which was taking place in the south of France in Languedoc. And, in contrast, the troubadours who were part of William’s influence as a youth, playing the lutes in Aquitaine and the ladies of the court of Aquitaine discussing  whether the man of the sword or the man of the pen was the most desirable.  The exploits of Eleanor of Aquitaine were much discussed across Europe, and some are depicted here.  She was a highly intrepid individual, with a sophisticated court in Poitiers,  who had gone to Crusades and got into all sorts of interesting difficulties there.