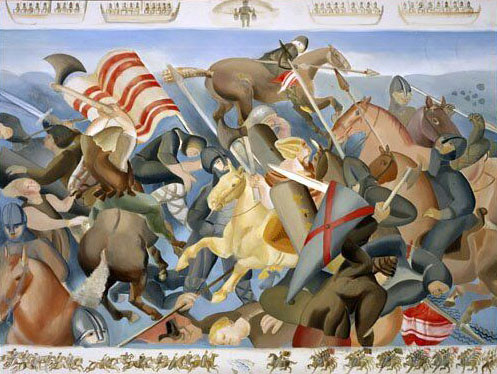 This panel is the last one to be completed, and is being worked on in Kilkenny at Rothe House.   It is a densely stitched depiction of the Battle of Ossory in County Kilkenny, which was MacMurrough’s opportunity to settle old scores. The King of Ossory, Mac Giolla Padraig, was MacMurrough’s mortal enemy. He had played a major role in the dethroning of the King of Leinster, and had also been responsible for blinding MacMurrough’s son and heir.  Dermot was thirsty for revenge. The army made their way to Freshford in Ossory in the summer of 1169.  Despite being fewer in numbers, Norman military tactics gave MacMurrough’s men the edge. The Irish-Norman army attacked in four waves. To begin, men taken from Wexford were sent into the fray to attract the shower of javelins from the men of Ossory. They were followed by a charge from the Irish cavalry and the Normans. The third wave consisted of another charge before the army’s archers brought up the rear.  These men were organised and experienced.  They annihilated the army of Mac Giolla Padraig.  It was said that the river of Glashnacrow flowed from Freshford running red with blood.  This panel shows MacMurrough, clad in his saffron trews, at the very heart of the battle on his small dun-coloured horse.  Wielding an axe, he is flanked by armoured Norman knights, one bearing a Fitzgerald kite shaped shield, while behind them flies the pennant of the Prendergasts and above, showing that he was recovered from his adventures in Wexford, floats the banner of Robert de Barry.   Following this victory, won when he was sixty four, MacMurrough only lived for a short few years, before being succeeded by his son-in-law, Richard, known as Strongbow.

In the upper border Dermot is seen clutching the decapitated heads of his most hated enemies.  On the side you see the Flemish who for quite complicated reasons had decided that this battle was too much for them. They fled the field after the battle and endeavoured to try to get back to Wales through Wexford.  But Dermot sent a messenger  to Wexford to try to prevent them from taking ships back to Wales..  Life on the Irish battlefields proved unbearable despite the lavish rewards being promised on all sides.

In the lower border the two armies confront each other. The loose formation of the Ossory men allowed them to fall victim to the experienced tactics of the international contingent, who advanced in organised waves.