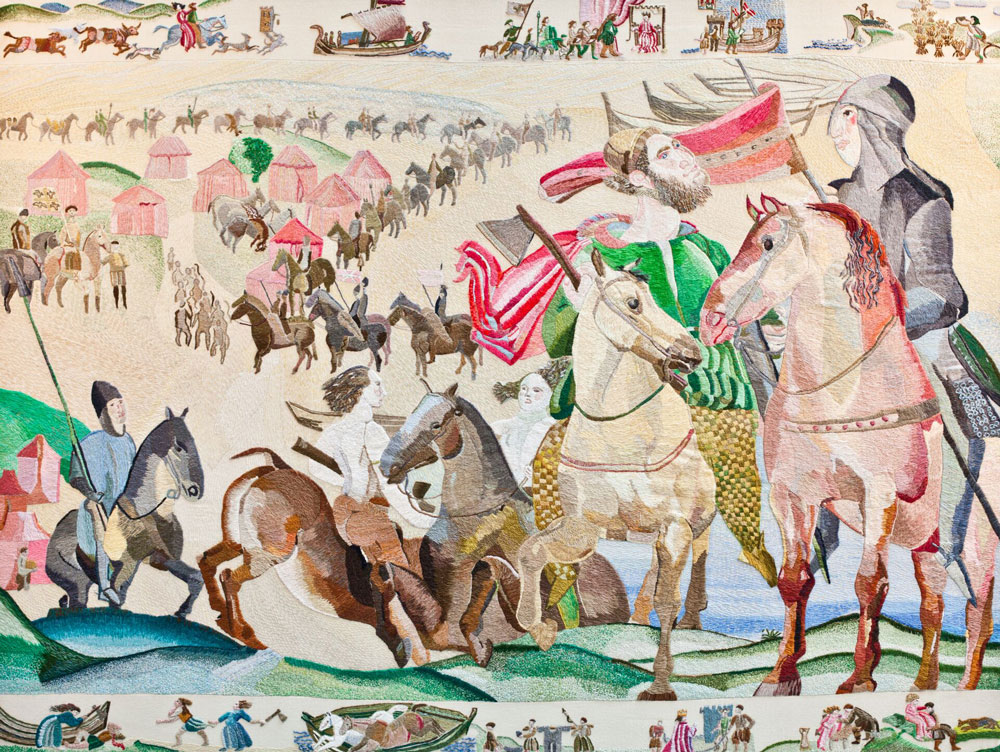 Dermot MacMurrough, King of Leinster had his hopes fulfilled at last when, in May 1169, a small band of 30 Norman knights, and 360 soldiers landed quietly on Bannow Strand, in the south of Wexford.

The Knights – of Norman / Welsh extraction – were nearly all related to each other. It was something of a family adventure, this Irish undertaking. Many had little to lose in Wales, and hoped to improve their individual lot, in answering Dermot’s call for help.

The equipment, horses and armour and supplies, is hauled up onto the shore. The knight’s leader, Robert Fitzstephen, is seen being greeted by Dermot and his followers, who have rushed from Ferns to meet them.

The heavily armed newcomers, with their massive steeds and colourful regalia, may have drawn laconic asides from Dermot’s men whose ancestral memory would know that the ultimate warrior goes into battle protected by no more than a helmet and some gold jewellery.

The top border shows how this event came to take place in the first instance. Dermot is seen galloping away with the abducted Dervagilla. He is also shown taking a ship to Bristol and travelling across France to find Henry II whose permission he needed to raise some help in Wales among the Normans, to fight his battles at home in Ireland. He finds Henry II in Aquitaine. He is also depicted in Bristol where he is reading out the proclamation of King Henry who gave him permission to raise a group of people to help. Nobody in Bristol wanted to hear him. However, he did manage finally to gather a group of Normans who were having a poor enough time in Wales. This included Robert Fitz Stephen, who is shown in the main panel.

The bottom border shows various adventures to do with Robert Fitz Stephen. It was almost a family outing – hardly an invasion. It was a mercenary group of Normans who were mostly related and who arrived in very small groups. Thirty knights arrived initially with three hundred men-at-arms. The boats are tilted over so that the horses can jump out. There is also an image of Alice of Abergavenny, a very famous murderess whose lover had been killed by the Normans in Wales and who wreaked revenge when she arrived. There is also Henry II talking to Robert Fitz Stephen. Robert was an adventurer, well suited to this venture where he was joined by a host of related individuals who had been kicking their heels in Wales without great prospects.