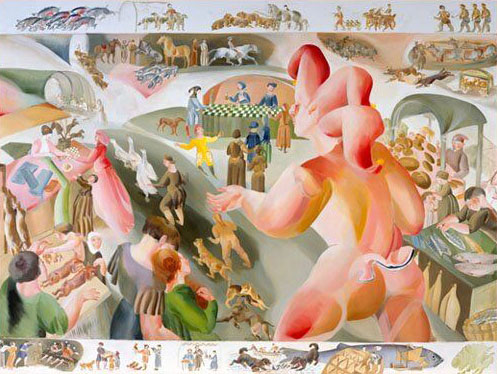 This panel depicts the fair day in Ros about 1220 when the town is beginning to realise its full potential The arrival of the Normans brought great prosperity to Ros and the surrounding area.  Reflecting this prosperity, Ros enjoyed four fairs a year, more than any other town in Ireland at that time.  Produce from the surrounding areas, such as wool and corn, ensured that the town remained wealthy and influential long after both William and Isabel had passed away.  Any divisions between the Normans and the Irish had all but disappeared within the town as well, as people made the most of the opportunities that the prosperous New Ross presented to them. The panel depicts one of the annual fairs. As a foreign jester entertains the crowd, the Italians bankers and tax collectors can be seen standing behind their chequered cloth, the source of the word “exchequer”. The stalls, full of goods and produce, once more reflect the success of the port of Ros.

The top border shows the produce arriving into the town for sale. Swine were a tremendously popular farm product. They would have been taller, and stronger looking than our present pigs and would have also been a lot wilder. Deer hounds and wolfhounds were both exported as well.  Working horses – ordinary horses used for drawing carts -would  have been bought and sold.  There would have also been a strong slave trade in and out of Ros at that time.

The bottom border shows what happened on the fair day, quite apart from the trading element.  It was when prisoners were dealt with, while the crowds were around and could see justice being done. People in the stocks are being pelted with snowballs because one of the fairs was on December 8th and it’s possible that there were snowballs instead of rotten apples thrown at individuals who were undergoing punishment in the stocks.   Traders or peddlers can be seen selling food to children.  Falcons are being  bought and sold as well.   Scribes set up tents because the vast majority of people could not write but may have needed documents.  We have discovered that Fitzgeralds and Barrys, both Norman names,  were known to have travelled to Newfoundland, so the Newfoundland dogs are shown pulling the fish out of the water for the fishermen, and then fish being dried,  which was what drew the Irish there in the first instance.  There is a map of part of the coastline of Newfoundland, where so many Irish made their homes through the centuries.