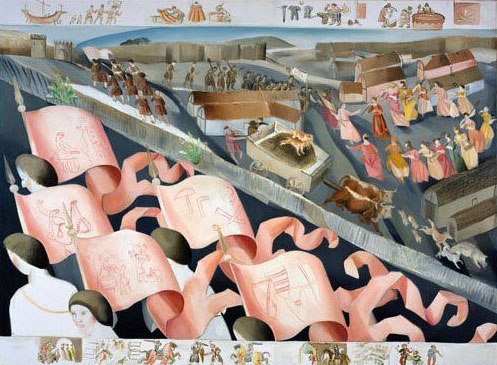 The bustling Norman town of Ros was unusual in Ireland in that it had no protective wall  for the first sixty years of its existence.  It’s vulnerability – for it was very rich – was, however, an illusion. It was protected in a manner more effective than that provided by mortar and stone. Leinster’s chief Gaelic family, the descendants of Dermot’s eldest illegitimate son, ruled in large parts of the surrounding countryside, and protected their kinsman William Marshal’s town. William and his sons had seen to it that the MacMurroughs were rewarded for keeping potential marauders at bay and Ros was permitted to thrive.  When trouble struck it was amongst the Normans themselves.  Walter de Burgh (Burke) , intent on subduing his vassel Maurice Fitzgerald, began to lay waste to areas of Geraldine territory, which in this case included Ros.

What happened next was described in a long and famous poem by an appreciative “trouvere” or poet, writing in old French – the language of the town –  whose manuscript is still extant and is held in the British Museum in London. It has been translated into more modern French and into English and in fact  has been illustrated in Victorian books, printed in Britain, so this particular event is very well known. The burgers of the town, unused to having their streets reduced to a battlefield, decided to throw a fosse and wall around the town to keep out the troublesome knights.   Hired help was slow, so the townspeople, guild by guild, decided to dig out a mighty ditch of twenty feet in width for a kilometre and half around the town. All sixteen guilds took part and on Sundays the ladies of the town took over the work.

In this panel, the guilds are seen marching up the steep incline from the town centre, to take up their shift. On the far right of the panel, a group of women get set to join in with the building work.  The earth from the huge fosse is drawn down to the town to establish a garden.

The banners shown are those of, among many others, the guilds of masons, drapers, and vintners of Ros.  The standards of the guilds can be seen in the bottom left corner.

The top border shows the various guilds and their occupations at the time – an armourer making various pieces of armoury, lances and javelins, and builders with their flag, the skull and crossbones, which is the flag of the masons.  There are blacksmiths are at work, and also people processing Waterford mantles which were a very important woollen export from Ireland.

On the bottom border the young “trouvere” pens his poem as the girls pass by on their way to the walls.   De Burgo and Fitzgerald fight their way up Mary Street while the inhabitants flee, and  MacMurrough and the town official meet together.  MacMurrough was the Gaelic protector of Ros, so he would meet with the officials from time to time and  make  sure that no lesser chieftain ever  penetrated the town.