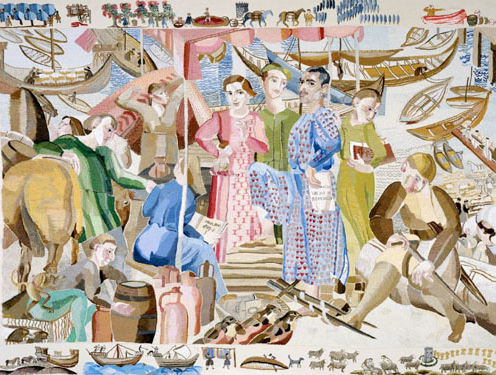 William Marshal, now Earl of Pembroke, and his Countess Isabel planned a new town on the River Barrow, which would fulfil their ambition to open the province of Leinster  to new avenues of trade at an international level.   Due to his prominent standing across Europe, William Marshall was easily able to acquire the services of quality shipbuilders, merchants and bankers to ensure that New Ross developed into one of the finest ports in Europe.  Arterial waterways, the Nore and the Suir, fed into the Barrow estuary allowing water traffic to stretch from the midlands to the sea.  This panel shows the thriving port of Ros at approximately 1220 and  the various components that had made it  one of the most successful in Ireland.   It was a hub of activity, a melting pot of varied cultures and nationalities.  Key figures from across Europe arrived, including bankers from prominent Italian companies. They set up financial centres and offered loans to local merchants, whilst exploiting the vast wealth that passed through the port,  facilitating exports and investing in futures, the latter largely in wool-clips..  It became such a success that by the year 1230 up to 400 ships could be anchored in the port at any one time. The Italian bankers, most likely a Frescobaldi, a Spini, and a Riccardi, in the centre of this panel can be seen presiding over the port’s comings and goings, whilst to the right Cistercian monks can be seen carrying wool, the most important single export, to the ships.  An Irishman awaits payment for his horse,  and a colleague ties on a shaggy mantle,which was a peculiarly Irish garment, much sought after abroad, as were Irish falcons and hunting dogs.

The upper border shows imports of wine and silk. It shows the mulberry trees being picked to make silk and  the silk being woven.  Vines are picked and wine was manufactured with a view to it being imported into Ireland.   Vast quantities came from Gascony and Anjou for the consumption of Irish chieftains, Norman lords and monastic abbots alike.

The lower border shows Irish horses being loaded into cogs – freight boats – for export to the armies in Europe.  The doors were sealed off until they arrived at their destination.   And on one side there are two ships confronting each other.  One of the ships is endeavouring to go to Waterford with its freight and William Marshall’s men are stopping them. Waterford and Ros were rivals,  and there was a certain amount of violence as a result.  On the other side, sheep from William’s son-in-law’s manor  in Old Ross are being shorn.