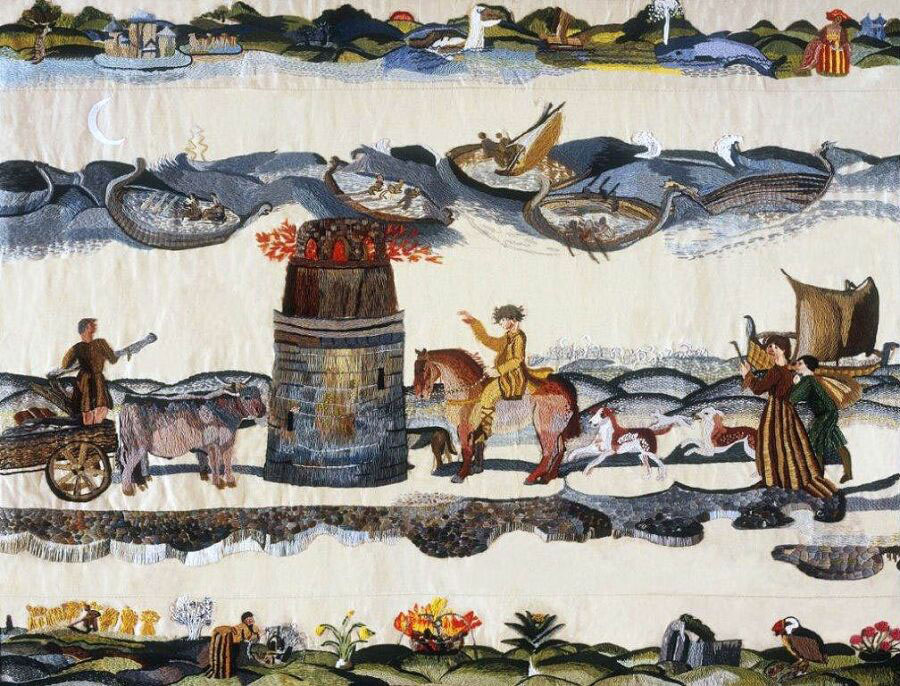 An enduring legacy of the Normans in County Wexford is Hook Lighthouse. Situated at the entrance of the Barrow estuary, the lighthouse still functions to this very day. Built around 1207  by William Marshal  it was constructed to safeguard the entrance to the Barrow estuary, the passage to Waterford and the emerging port of Ros.   The Normans were preoccupied with opening up the province to trade. This panel shows one of William Marshal’s men, Raymond le Gros, overseeing the lighting of the beacon, whilst ships are tossed on stormy seas.
It replaced the bonfires that had been kept going by the Welsh monks at the nearby monastery of Rinn Dubhain  for centuries in the same place,  undisturbed by the Vikings.  It was perhaps based on a design seen by William Marshal while on the crusades at Acre .

The upper border shows the dreams that those who built the lighthouse had about  bringing exotica from the East into the Leinster area.   It also shows a whale spouting off Hook Head.

In the lower border blowholes erupts in fields around the tower.  A monk is feeding Dubhain’s bonfire which is flanked by the emblems of Wales, the daffodil and the leek. The ruins of the early parish church are shown.  It is still there today.  The rich black soil of the peninsula is seen being cultivated in strips as was common at the time, and at the other end of the border the puffin, a native of the nearby Saltee Islands, is depicted amid the sea pinks.

Hook Lighthouse is open to the public and more information can be seen at http://www.hookheritage.ie/the_lighthouse.html.