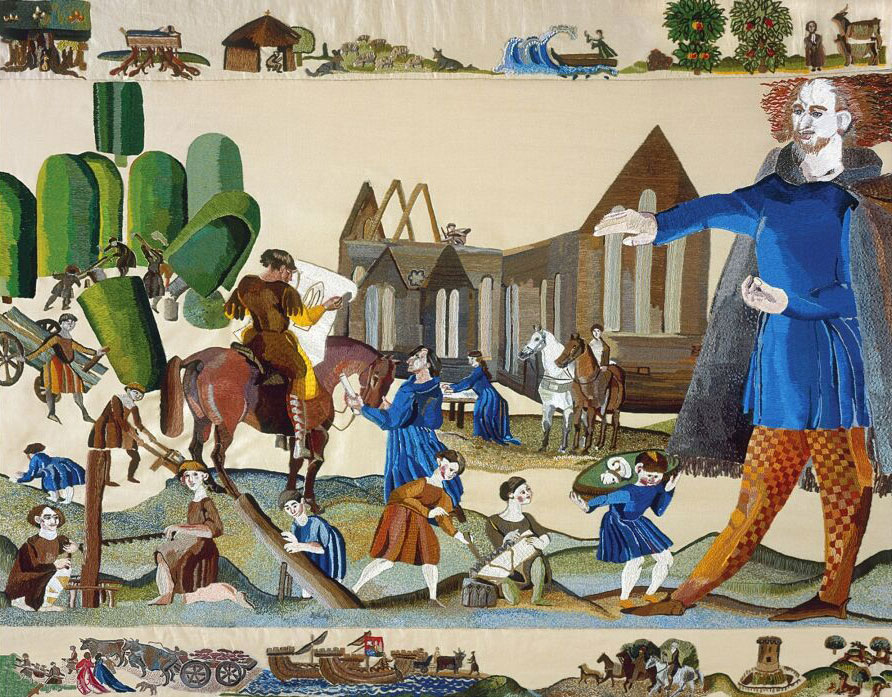 Around the year 1207, William and Isabel began work in earnest to create New Ross.  They dreamt of creating a town and port that would rival that of nearby Waterford.  The building of St. Mary’s in 1210 was a symbolic moment for the town.  Believed to be the grandest of the early Irish Gothic churches, it was a major development for blossoming Ros.   Positioned high above the town, the parish church of St. Mary’s cathedral-like presence,  of unusually large dimensions, reflected the level of importance attached to the new town itself. Built using stone from Bristol, England, it is said that Isabel, Countess of Pembroke, was responsible for its creation. To this day, a heart shrine, possibly of Isabel’s, remains within the church.

To reflect Isabel’s importance in the founding of St. Mary’s, she can be seen in the centre of the panel leaning over a mapping table, whilst a mounted William peruses the plans and craftsmen work at their various tasks.  To the right of the panel is the spirit of Dermot MacMurrough, his outstretched arm claiming credit for the grand new church

The upper borders show scenes from the lives of the much revered early Wexford saints,  whose life stories are a marvellous amalgam of ancient ways of being and early Christian thought.  Saint Moling’s bier said to be was surrounded by foxes.  St Fintan made an arrangement with two wolves to look after the sheep so that he could study in his hut.  Saint Abhan or Ibar, living in an oak tree, was said to control  the waves, the sea, and the tides.  Saint Aidan who was known to have a small farm with apple and cherry trees.  Many Wexford children are named after Aiden and Moling or Mogue.

The lower border shows Dundry stone being taken from ships that had sailed from Bristol and berthed at the port of Ros.  This was brought by oxen up St. Mary’s Street for the building of the church. Also in this border a party of huntsmen returns from Old Ross a few miles away, where around the motte and bailey Norman farms thrived and a deer park was established.