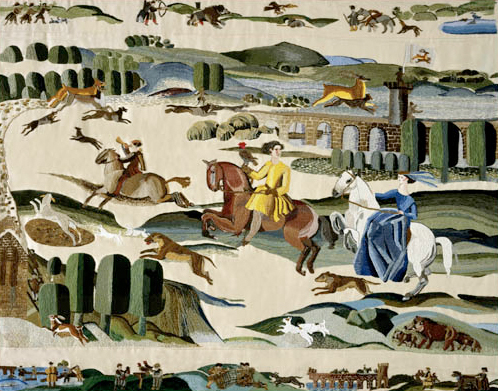 This panel depicts William, Isabel and her MacMurrough cousins hunting in the forest of Ros.   Having safely arrived in Ireland, William enjoyed exploring his wild and beautiful estates. The forests were brimming full of wildlife. They were the perfect hunting grounds.  Stags and wild boar would have been common prey, whilst the hunting party would have used falcons for capturing pigeons and rabbits.   Whilst touring the estate, William was accompanied by Isabel’s Irish cousins. They taught him everything he needed to know about how to negotiate the sometimes testing terrain. William Marshal had grown up with horses at the heart of his family’s existence.  His father, John the Marshal, had been responsible for the upkeep and maintenance of the King’s stables.  This knowledge of horses proved to be the common ground between himself and his new Gaelic relatives.    William and his men would have brought their own hounds with them initially.   Irish wolf and deer hounds were nevertheless seen as superior in Irish conditions and were indeed exported in a numbers from the thriving port of Ros.

The top border shows the Norman practices of hunting at the time. Boars were common everywhere and deer as well, so boar and deer would both have been hunted.   Falcons would have gone after rabbits, hares and pigeons.  The beaters are shown beating game out of the covered areas, and a bow-man wounds a boar.   A deer is being carried home on the back of a pony.

In the lower border William begins to grapple with what was required in his new undeveloped province. A bridge was vital to the town, linking it with Kilkenny and  allowing traffic and trade to flow more easily.   Horsemen trot over the completed bridge.  The preoccupation of his relatives would largely have been hunting, so there is a hare  being rushed into a trapping net and the hawks line up on their stand with their hoods on.