The Ros Tapestry is a unique project that has been ongoing in the South East of Ireland since 1998 and has involved over 150 stitchers working on 15 very large tapestries for a permanent exhibition in New Ross. It is an excellent example of creativity and community spirit on a grand scale and depicts our Norman history, linking many of the Norman sites in Ireland’s Ancient East. It is one of the largest series of embroidered tapestries in Europe. Each tapestry depicts a different significant event in the history of the town and surrounding areas. New Ross is central to at least four counties which were heavily influenced by the Normans – Wexford, Waterford, Kilkenny and Carlow, and their tales are richly told in thread within the Ros Tapestries.

The project is the brainchild of Rev. Paul Mooney, who was appointed to St. Mary’s Church in New Ross in 1998. Inspired by the famous Bayeux Tapestry in France, he conceived the idea of creating a series of tapestries to display in his church, to commemorate the Norman history of the area. St Mary’s is built within the ruins of the original Norman church attributed to the famed William Marshal and his wife Isabel de Clare, who founded the town of New Ross.

To this end, Ann Griffin Bernstorff, a local artist, was commissioned to paint the cartoons. The series of 15 large embroidered panels, each measuring 6 ft x 4.5 ft, is based on these original paintings, which show the history, costumes and way of life of Ireland in the 13th century. The stitching of these panels was done by over 150 volunteers. They were trained by Alexis Bernstorff, a textile specialist, with initial help from Jean Barry and Mairin Dunne. Groups of stitchers were set up around the county and in Kilkenny. They have worked in a variety of venues, from private houses to community centres, converted cowsheds, a castle and a fort.

The first tapestry was completed in 2002 and to date 14 of the 15 tapestries are finished. The final one is being stitched in Kilkenny and is nearing completion. As work progressed it became obvious that the tapestries were too large to display in the church, and so in 2009 the Ros Tapestry Exhibition was opened on the Quay in New Ross. Everyone can now see this amazing exhibition which is a fantastic legacy for the country, combining as it does wonderful art, admirable craftsmanship, and a multitude of fascinating stories. 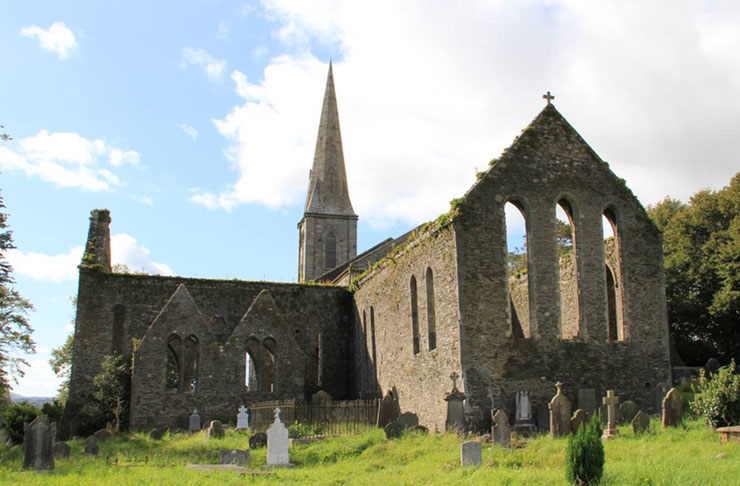 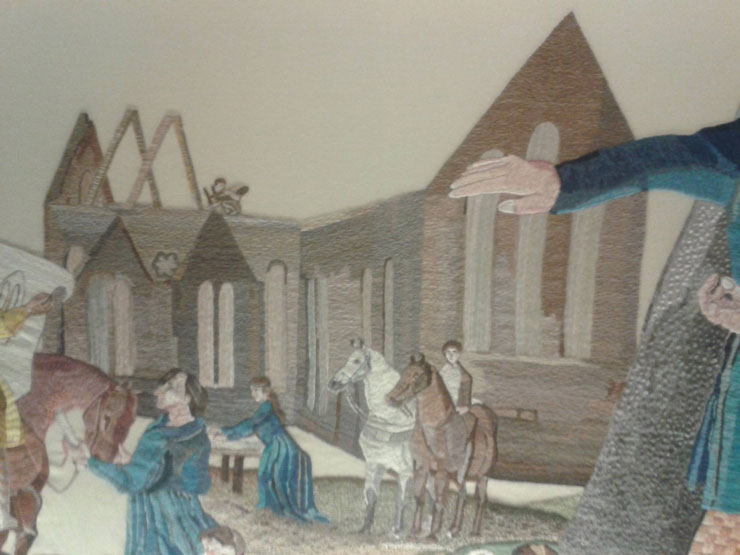 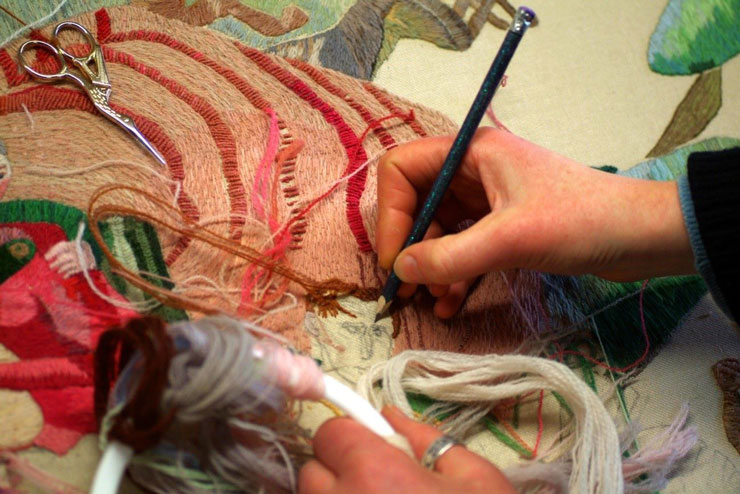 15 embroidered panels, each measuring 6ft x 4.5ft, show the history, costumes and way of life of Ireland in the 13th century 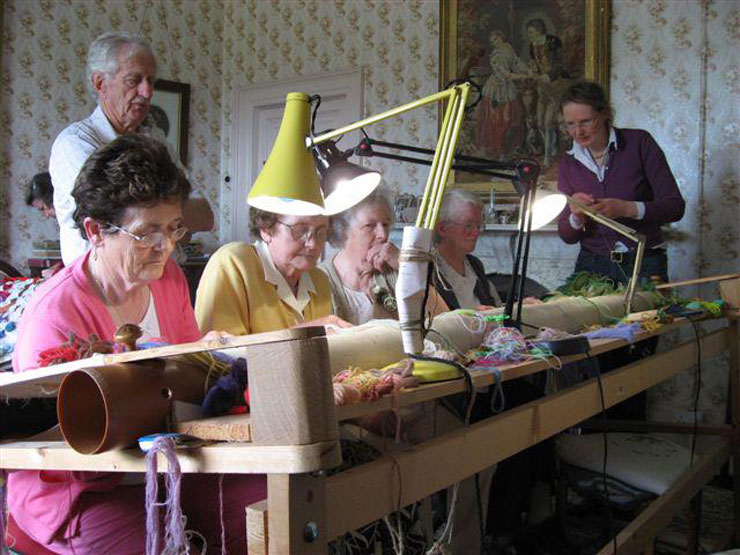 The stitchers have worked in a variety of venues, from private houses to community centres, converted cowsheds, a castle and a fort 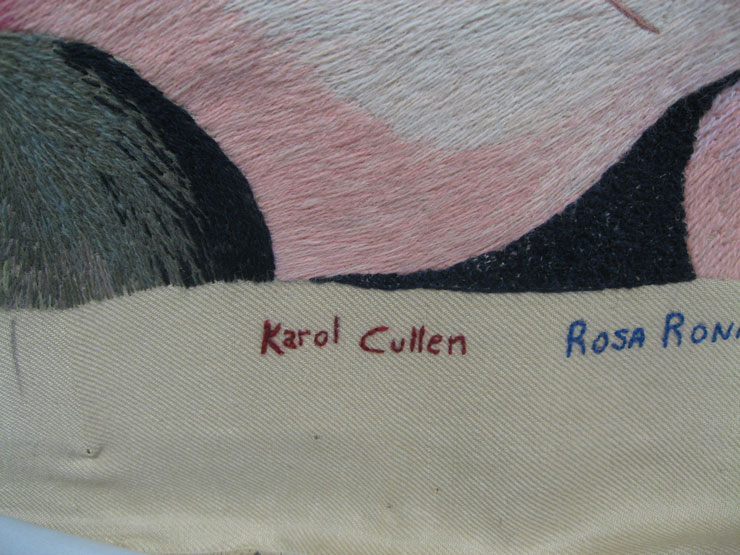 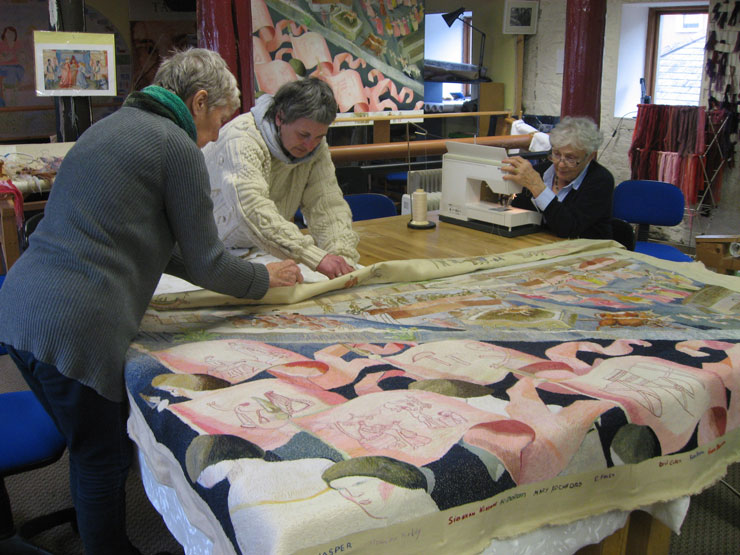 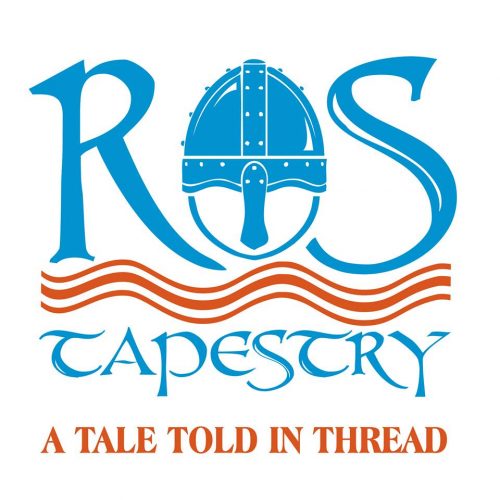